Ruling today at a court in Strasbourg, a European judge has halted the extradition of British-born Babar Ahmad, a computer expert sought by the US since mid 2004, over concerns about the possible human rights violations he could face once turned over to American custody. 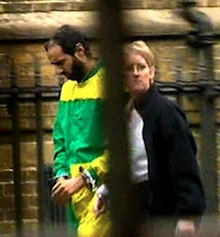 The European Court of Human Rights ruling will also affect the pending extradition of three other people current held by the British government, including high profile cleric Abu Hamza al-Masri who the US has claimed was involved in a failed attempt to establish a “terrorist training camp in Oregon.

Ahmad holds the unhappy distinction of being the British citizen held for the longest period of time in detention without a trial, having been arrested in August 2004. He is accused of running websites supportive of terrorism.

The primary issue for the court is that Europe’s human rights charter may not allow them to extradite people who would face life without parole in a “maximum security” US prison. The ruling cites a report from Human Rights Watch about the harsh conditions at the Florence, Colorado prison they would likely be sent to. The EU has already forbade extradition to the United States or anything other country for crimes which may result in the death penalty.