NATO forces are again looking for diplomatic cover after an overnight attack by a NATO helicopter killed at least five Afghan soldiers in the Ghazni Province and wounded two others, prompting an angry response from Afghanistan’s Defense Ministry. 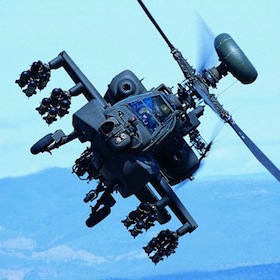 “The Ministry of Defense condemns this killing,” insisted a spokesman, adding “this is not the first time such an incident has happened, but we wish that at least this would be the last one.”

NATO is struggling to explain the killings of the troops, who were reportedly setting up an ambush for insurgents in the area. Spokesman Josef Blotz guessed that it was “perhaps a coordination issue” and insisted that “we were obviously not absolutely clear whether there were Afghan national security forces in the area” when the rockets were fired.

NATO airstrikes, predominantly those from the US, are responsible for a large number of killings of not only allied Afghan forces, but also enormous numbers of Afghan civilians. At one point NATO promised to cut down on the number of civilian deaths, but new commander Gen. David Petraeus is expected to revise the rules of engagement to be more lax in fighting near civilians, citing dropping morale.

And while Afghan security forces killing NATO troops is more often cited, today’s incident and others like it are also fueling a growing lack of trust between the two forces, which often seem to be struggling with each other as well as the insurgency.