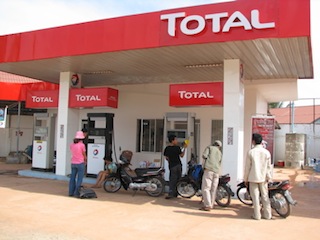 “The embargo affects the population, too many things are politicized, de Margarie insisted, adding that “we do not think an embargo on the delivery of petrol products is a good way to settle differences of a political nature.”

The unilateral US sanctions against Iran, which were signed by President Obama this week, have ordered every energy company in the world to stop delivering refined petroleum to Iran, nominally to punish it for its civilian nuclear program. Total announced on Monday that they would be suspending all deliveries to Iran to avoid US punishment.

Though Iran is one of the world’s largest producers of crude oil, they have comparatively little refining capacity and have had to rely on imports from international companies like Total for civilian needs like gasoline. Since the sanctions Iran has pledged it will increase its refining capacity and become self sufficient.

Though President Obama had initially sought an exemption for companies from the nations that have permanent seats on the UN Security Council (like France), primarily to avoid angering them in the push for international sanctions, it seems companies like Total are not counting on such exemptions being forthcoming, particularly now that the administration has already gotten its way on UN Security Council sanctions.