Speaking at a Connecticut fundraiser, Republican National Committee chairman Michael Steele issued a surprisingly frank assessment of the massive escalations of the Afghan War, calling it “a war of Obama’s choosing.” 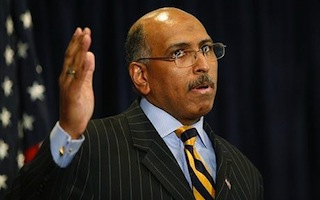 “If he’s such a student of history,” Steele said, “has he not understood that, you know, that’s the one thing you don’t do, is engage in a land war in Afghanistan? Everyone who has tried, over 1,000 years of history, has failed.”

Steele has since faced a backlash, both from Democrats who note that the war was going on for seven years before President Obama took office and from hawkish members of both parties, who claim he is “undermining the morale of our troops” by noticing that the war is unwinnable.

But is he wrong? Though the war in Afghanistan predates the Obama Administration, the president has tripled the number of US troops in the nation since taking office, and his own officials have repeatedly presented their strategies as a “new start” to the war.

While the Bush Administration’s disastrous foreign policy was defined primarily by its choices to continue to escalate the war in Iraq, with Afghanistan an afterthought, President Obama has quickly made Iraq the afterthought and has indeed chosen to make Afghanistan his war.

The real question then is not if Steele is right, for he surely is. Rather, it is if Steele can survive the backlash provoked by daring to tell the truth. On that question, the jury is still out.