The Russian government has today issued a formal complaint to the UN Security Council about the German government’s seizures of Russian cargo bound for Iran and the detention and questioning of men involved in the deal. 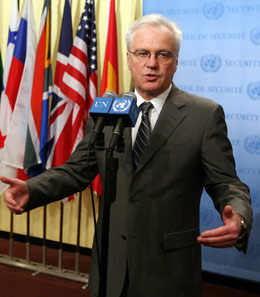 The equipment was meant for the Russian-built Bushehr nuclear reactor, and German officials seized it under the pretext of sanctions against Iran. According to Russian Ambassador Vitaly Churkin, the seizure was not in line with the UN Security Council sanctions.

German officials have been probing Russia for routing the shipments through Europe claiming that it might violate the recently passed additional sanctions of the European Union. The computer and monitoring equipment was meant for the civilian energy plant, the legal status of which is not in question.

Yet officials say the EU’s sanctions, nominally in place to stop the fictional Iranian nuclear weapon program, don’t differentiate between Iran’s perfectly legal nuclear power generation program and its hypothetical future weapons program, making it apparently free to seize the goods no matter what they were for.

Russia has been critical of the recent flurry of sanctions from the European Union and the United States in the weeks since passing the UN Security Council sanctions, saying the new sanctions undermine the UN and do damage to any prospect of diplomacy.