At approximately 10:50 PM eastern time, Israeli warships captured the MV Rachel Corrie, an Irish aid ship bound for the Gaza Strip. Israeli troops are said to have boarded the vessel and arrested everyone on board, which included a high ranking former UN official, Assistant Secretary General Denis Halliday, and a Nobel laureate. No violence or injuries were reported so far. 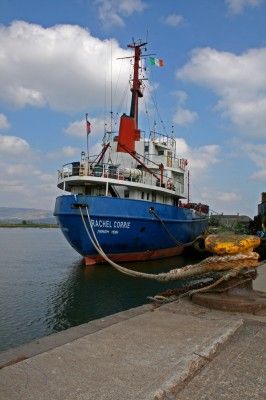 Reports from the Rachel Corrie, named after a US-born peace activist who was slain by the Israeli military in the Gaza Strip in 2003, were available right up to 10:35 PM, when they reported that their radar was being jammed. The ship had hoped to reach the Gaza Strip early Saturday morning.

Israel had demanded that the ship divert to Ashdod, but said it would forward the cargo to the Gaza Strip after it was searched. Crew on the Rachel Corrie suggested that Israel search the ship at sea but allow it to dock in Gaza, a proposal which Israel rejected. Prime Minister Benjamin Netanyahu has promised that never again will an aid ship reach the enclave.

The ship is said to be carrying upwards of 560 tons of cement as well as CAT scanners, wheelchairs and other aid, and around 20 activists. It was organized by the Free Gaza Movement, a privately funded aid group which has gotten a large donation from the Perdana Global Peace Organization in Malaysia.