US Ambassador to Iraq Christopher Hill today expressed “deep concern” that the Iranian political parties were so slow in setting up a coalition government, insisting it was time to “get this show on the road.” The show, as it were, seems further from the road than ever today, however. 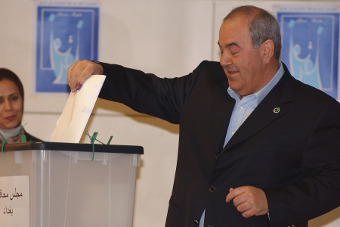 That’s because early today, the narrow plurality of Ayad Allawi, whose Iraqiya Party won a 91-89 victory over the ruling State of Law bloc saw its lead vanish with the bang of a gavel, as a court ordered two of Iraqiya’s winning MPs banned from holding office.

Nominally 89-89, the result is further thrown into doubt by a number of non-winning Iraqiya candidates also being banned, forcing a “recount” of the proportional representation. The Justice and Accountability Commission has also made it clear they wont allow Iraqiya to replace their own banned candidates, insisting that instead they will go through a convoluted process that could result in handing those seats to Maliki’s State of Law or some other bloc.

If that wasn’t enough, Maliki has also had at least one other Allawi MP arrested, and his government has argued that if that MP is still held (though so far it does not appear he has been charged with anything) when parliament sits for the first time, his seat won’t count toward an Allawi bloc’s overall size.

There is also a recount going on in Baghdad, at the behest of Maliki, which the State of Law bloc has already predicted will give them further additional seats. The end result will likely be to give Maliki at least the appearance of a plurality, but also to do serious damage to the credibility of the election process and make the prospect of anyone else joining his government increasingly slim.