All his previous statements had appeared to be firmly in opposition of such a move, but Admiral Michael Mullen now says he believes attacking Iran would “go a long way” toward delaying the nation’s civilian nuclear program. 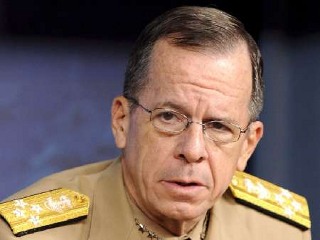 The comments seemed to be the most clear indication yet from the Joint Chiefs chairman that he wasn’t completely opposed to the idea of a military attack against Iran, though he insisted the attack should be a “last option” and that at any rate it was “not my call.”

Still, the fact that it is an option at all with no clear evidence against Iran, and with the nation pressing for more diplomacy, suggests that the Obama Administration, despite saying it is “still interested” in talks, is looking past the indirect talks and toward getting back to the usual business of making threats.

The timing however is clear, as Iran reports that they have selected another site for a civilian enrichment facility, poised to be the nation’s third such site. Though the Natanz site is at present the only one operating, Iran seems eager to spread its program across several locations, apparently with an eye toward avoiding a single military strike by the US or Israel wiping the entire program out.

For the US, this announcement is likely far scarier than any of the made up allegations about Iran’s nuclear program. The US has always held the prospect of attacking over the Iranian government as a bargaining chip, as Iran spreads its infrastructure around that threat becomes far less credible, as the initial salvo becomes less of a sure thing and the danger of an international backlash against an American attack remains as real as ever.