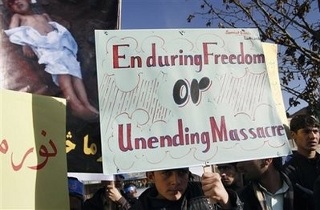 In the first three months of 2009, NATO killed 29 Afghan civilians according to their own, extremely conservative statistics. In the same period of this year, those numbers show at least 72 Afghan civilians killed by the international forces.

The numbers come as Gen. Stanley McChrystal promises yet more changes to the rules of engagement in the nation, designed to minimize civilian killings by the international forces. It should be noted, however, that Gen. McChrystal revised these rules several times in late 2009, only to see the civilian killings rise precipitously.

It also comes just a day after President Obama gave a high profile interview insisting “progress” was being made in the war, and that the Taliban’s momentum had been blunted. This could perhaps be defended in that the Taliban’s civilian toll rose only 40% while NATO’s civilian toll rose 148%, but this hardly seems to be the sort of progress that the president should be bragging about in international interviews.