Speaking today through the al-Manar TV channel, Lebanese government Minister Haj Hassan, a member of Hezbollah’s political party, said the faction will neither confirm nor deny the claims it has acquired scud missiles, and added that it was not Israel’s business one way or the other. 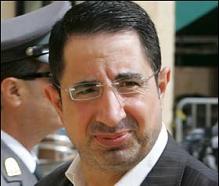 Israel claimed earlier this week that Hezbollah had acquired the missiles, which would allow them to hit any part of Israel with an attack, and further accused Syria of providing the missiles. Israel did not provide any proof of its allegations.

Syria has pointedly denied providing any scud missiles to Hezbollah, and says that Israel’s accusation is just the latest attempt at damaging the peace process, and could even be a pretext for war.

The growing fear over yet another Israeli invasion of Lebanon has helped considerably in mending relations between Hezbollah and the nation’s other political parties. The repeated Israeli claims that such an invasion is “inevitable” has likewise given Hezbollah ample reason to rearm itself as much as possible as quickly as possible, as the group will likely be expected to provide the bulk of the nation’s defense from such an attack.

11 thoughts on “Hezbollah: Missiles None of Israel’s Business”