Much has been made of the signing of the new nuclear disarmament treaty signed by Presidents Obama and Medvedev, an ambitious plan to reduce the number of nuclear warheads in the US and Russian arsenals. But the treaty seems to be on an extremely shaky foundation, and the prospect that it will survive over the long term seems uncertain at best. 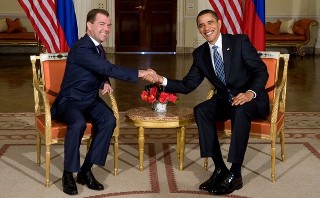 Russia today reiterated their concerns over the US missile defense shield, and warned again that it could “derail” the treaty. Russian Foreign Minister Sergey Lavrov insisted that they could “opt-out” of the treaty at any time if they become too uncomfortable with the US installing of defensive missiles along their border.

The final draft of the treaty contains no mention of missile defense at all, something which the Obama Administration has spun as a major victory but which may in reality be a major hole in the treaty, a lack of comprehensiveness that could make it short-lived.

Keeping the missile defense unmentioned is particularly important as the Obama Administration struggles to win ratification of the treaty in the Senate, which will require a two-thirds majority and is already seeing some vocal opposition.

Russia and the US have been clashing over America’s missile defense plans for several years now, and the finalization of the treaty, which was supposed to come last year, was delayed for many months by the inability to reach a consensus. Finally the matter was just “dropped” so a pact could be reached.

So the treaty is signed now, but the major stumbling block is still there. Barring a future understanding on the issue, something neither side appears to be working particularly hard on, missile defense will remain an issue that must inevitably render the treaty untenable.