The German government has long been loathe to admit that there is a war going on in Afghanistan, a touchy subject considering the legal prohibitions against the nation participating in wars, but Defense Minister Karl-Theodur zu Guttenberg today conceded that the situation was at the very least “war-like.” 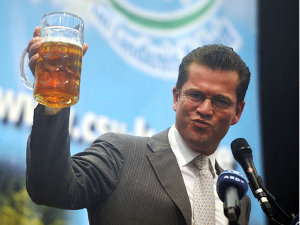 Guttenberg’s comments came as he expressed “condolences” for the latest friendly fire deaths in the Kunduz Province, in which German troops attacked an Afghan troop transport vehicle on a mostly deserted highway Friday night, killing six.

According to the German military the troops in question were “reinforcements” being sent to the scene of fighting against the Taliban not far from Kunduz City, and they saw two vehicles they identified as “civilian.”

Despite assuming they were civilians, they demanded that the vehicles “stop” until the German APC passed, when the vehicles didn’t stop they attacked them, only to learn they were full of soldiers. The Afghan Defense Ministry has promised an investigation.