Though Ali al-Lami failed in his effort to become a member of Iraqi parliament, his position at the head of the Justice and Accountability Commission (JAC) is still allowing him to hold incredible sway over the results of the March 7 vote. 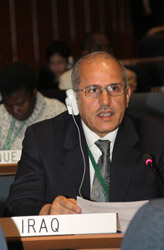 The JAC already banned hundreds of mostly Sunni candidates ahead of the election, including several top supporters of the Allawi bloc. But now that Allawi’s Iraqiya faction has seemingly won the election, it would have seemed the JAC’s efforts had failed. Or have they?

Not according to al-Lami, who now says another 52 candidates, including six who were elected as MPs to Allawi’s faction, will be banned. Not only that, but al-Lami says Iraqiya will not be allowed to replace those six with unbanned candidates. In short, if the JAC has its way, Iraqiya’s two seat plurality will become a four seat deficit.

With Prime Minister Maliki already looking to knock out Iraqiya’s plurality with the attempted detentions of four of their MPs-elect, the prospects are looking increasingly dim that Allawi will ever be allowed to form a government. His electoral success will simply be a footnote that, in the complex system of Iraqi politics, is really beside the point.