Former Iraqi Prime Minister Ayad Allawi today vowed that the process for forming a government would not be a quick one, and that his Iraqiya faction would prevent the return to the “one-man rule” of the Maliki government. 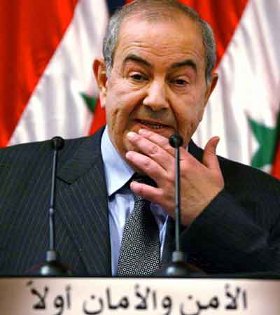 Allawi said he wasn’t particularly concerned with “what kind of shape the government will take or how long it’s going to take,” but insisted that a quick resolution was a recipe for disaster.

Allawi’s Iraqiya bloc is neck-and-neck with Maliki’s State of Law party as the vote count nears an end. Whichever bloc ends up with more seats will get first crack at forming a government, and right now it truly could go either way.

But while most of the attention has been on either of the two frontrunners forming a government and relegating the other to the minority, Allawi said it was possible they could join together in a grand coalition. This would only happen, Allawi insisted, if Maliki abandoned his sectarian positions and gave significant government positions to other people. Without that, Allawi cautioned, Maliki would have “no future.”