Iranian Ambassador to the IAEA Ali Ashgar Soltanieh warned today that the Iranian government’s most recent counteroffer for third party enrichment would not last forever. 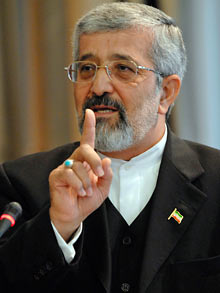 “Iran’s proposal for a simultaneous exchange on Iranian soil of our low enriched uranum for fuel enriched to 20 percent is still on the table but it will not stay there forever,” said Soltanieh.

He did not give any indication of a specific deadline for the deal, but did suggest that sanctions of “any development which might disturb the climate of cooperation” would prompt the offer to be withdrawn.

It is highly unlikely the offer would be accepted at any rate, as the US and other Western nations seem to have abandoned diplomacy in favor of pressing for sanctions. The Obama Administration angrily condemned the offer for even being offered, and said it proved the need for more sanctions.

But Russia and China both appear firmly against “crippling” sanctions at the moment, and Brazil, a current member of the Security Council, has also voiced its opposition.