Netherlands Prime Minister Jan Peter Balkenende was forced to offer the resignation of his government this weekend, setting the stage for early elections, after internal unrest over his attempt to keep around 2,000 Dutch troops in Afghanistan
past their pledged pullout date. 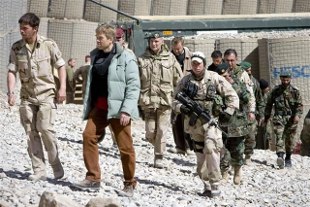 The Netherlands, a comparatively large contributor to the NATO invasion of Afghanistan despite its relatively small size, was initially scheduled to withdraw in 2008, but agreed to push this back to 2010 because replacement troops were not forthcoming.

But in October, the Labor Party and the Christian Union Party put their feet down, declaring that the mission would have to end in 2010 and no new extensions would be supported.

But NATO Secretary General Anders Fogh Rasmussen, eager to see more escalation in the war, pressed the Dutch government to back off its stance and keep the troops in Uruzgan Province for the foreseeable future. Balkenende seemed to think that, despite the unpopularity of the war, he could push the measure through parliament.

But Rasmussen’s bellicose declarations earlier in the month that Afghanistan is “only the beginning” of a much larger series of military operations for the alliance loomed large, and debate in the Dutch Parliament became extremely contentious.

Ultimately Deputy Prime Minister Wouter Bos, who ran in 2007 on a pledge to withdraw from Afghanistan, played his trump card and withdrew from the coalition government, taking his Labor Party with him. Without them, the coalition could no longer survive.

More important than the toppling of the Dutch government, and the prospect of new elections, is NATO’s actions which led up to it. Generally speaking, NATO has not made a habit of pressuring for action against the will of that nation’s ruling coalition, and many saw Rasmussen’s request as a sign that the Dutch coalition’s leadership had already signed off on the move. If NATO’s eternal quest for more troops to throw at Afghanistan has seen it now moving unilaterally against the elected governments of member nations, Rasmussen’s comment that “Afghanistan is only the beginning” may soon need to be revised to “the Netherlands is only the beginning.”