In an interview given yesterday to the Washington Post, Attorney General Eric Holder suggested that the White House might abandon giving Khalid Sheikh Mohammed a civilian trial entirely, though he insisted that it was not his personal preference to do so. 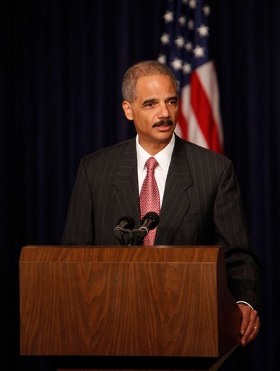 Holder insisted that in practice “I’m not sure the location or even the forum is as important as what the world sees in that proceeding.” Khalid Sheikh Mohammed was initially set to face a civilian trial in New York City.

President Obama originally told Holder to choose the site of the trial, but is reportedly planning to take a direct role now, after the New York City trial has proven incredibly unpopular.

Congress has even threatened to block funding for the trial, though the administration insists Obama’s sudden involvement in the location and possibly the nature of the trial has nothing to do with politics, and is a “national security” issue.