Following an attack by Somali insurgents which killed four African Union (AU) soldiers, the AU shelled the crowded Bakara Market in the capital city of Mogadishu, killing at least 11 civilians. 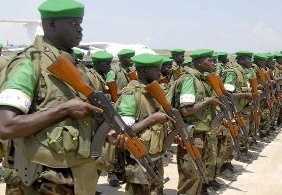 AU forces haven’t commented on the incident, but witnesses say one of their attacks hit a bus station and another destroyed a store in the marketplace. Over 20 other civilians are receiving treatment for injuries.

The African Union has come under increasing criticism from international aid groups for “indiscriminate” attacks on civilians, with several high profile incidents like todays happening over the past several months. The AU has insisted it only attacks areas outside the control of the transitional government, but as that government only controls a few city blocks in Mogadishu it leaves virtually the entire nation open to being targeted.