Citing Iran’s intentions to begin enriching uranium for medical isotopes, the US and French governments today demanded harsher sanctions against Iran, with Secretary of Defense Robert Gates saying the sanctions were in everyone’s best interest. 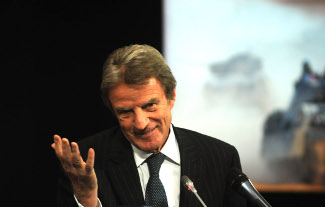 Though State Department spokesman PJ Crowley conceded that there was a legitimate humanitarian need for fuel for the US-built Tehran medical research reactor, he said it was more important that Iran “pay a price” for its intransigence.

French Foreign Minister Bernard Kouchner was even less accepting of Iran’s civilian enrichment, calling it “blackmail” and “truly negative.” He insisted that sanctions against Iran were the “only option left.”

Iran has been producing 3.5% enriched uranium, a level needed for its nuclear power plant at Bushehr. The creation of fuel rods for the medical isotopes will require enrichment to around 20%, still well short of the level needed for weapons.

Though there is question about Iran’s ability to produce the fuel rods, the shortage of medical isotopes could force thousands of Iranian patients to go without nuclear medicine, and with third-party enrichment talks stalled, the nation insists it has no choice but to try for self-sufficiency.

3 thoughts on “US, France Press for More Iran Sanctions”