The latest in a long line of attacks against a key supply route for forces in Afghanistan, a NATO oil tanker was attacked in the Pakistani city of Peshawar. The tanker was destroyed. 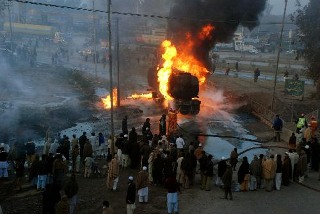 According to police, the attackers opened fire on the tanker and deployed a “magnet bomb” against it, sparking a fire which local firefighters were battling for hours. The attackers vanished without a trace, and no arrests have yet been made.

Though officials have spent years trying to find alternative routes, the supply line through Pakistan, by way of Peshawar and the Khyber Pass, remains important for NATO. The route has remained in peril despite repeated pledges to up security in the region.

But while Peshawar remains the go-to site for such attacks, militants have branched out in targeting convoys even earlier, with a raid last week in Karachi showing that even the port city is no longer safe.