US officials are publicly pressing for Pakistan to drop all resistance to the Fissile Material Cutoff Treaty, or FISSBAN, warning that it is imperative that the measure move forward in 2010. 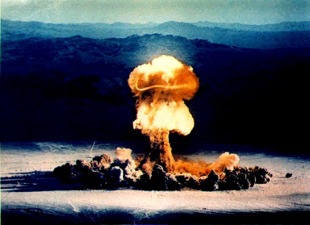 FISSBAN has largely remained in suspended animation at the UN for the past 12 years, but the Obama Administration is now demanding that ban move forward exactly as currently proposed.

Pakistan has resisted the existing draft of the ban, as it only covers the production of new weapons-grade uranium and plutonium and does nothing to address existing stockpiles. As India has enormously more material than Pakistan does, the nation has expressed concern FISSBAN would amount to codifying India’s nuclear supremacy over them into international law.

The US had previously objected to the draft in a 2004 vote, citing opposition on the basis that it would create a system that actually verifies that nations are abiding by it. Only Palau joined the US in voting against it, with Britain and Israel abstaining, and eight other nations not voting at all.

One thought on “US Presses Pakistan on Nuclear Ban”