Britain’s Home Secretary Alan Johnson announced today that the government is raising the “terror threat level” from substantial, where it had been since July 2009, to “severe,” meaning an attack is considered highly likely. 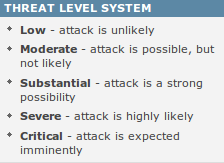 Despite this, Secretary Johnson insisted that the government had no intelligence to suggest that any terrorist attack was imminent. He said the increase in the level simply meant the public should be “more aware.”

Though Johnson refused to point to any single incident causing the increase, most see the move as a response to the failed Detroit lap bomber and the growing concerns over al-Qaeda in the Arabian Peninsula, the Yemeni group which took credit for it.

Britain’s terror level system has five stages, as does the United States’. Severe is the second highest level, corresponding to Orange in the US. America’s current level is still at Yellow, one level lower, though officials have raised the threat level to Orange for flights.