Secretary of Defense Robert Gates’ frank admission that Blackwater Worldwide is currently on the ground operating inside Pakistan has left Pakistan’s own government scrambling to cover up what has amounted to over a year of overt lies about the contractor’s operations. 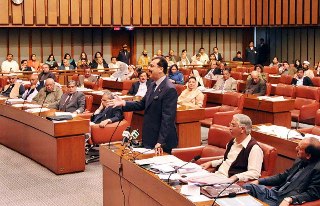 Incredibly enough, Information Minister Qamar Zaman Kaira publicly denied that the government had ever denied Blackwater was operating in Pakistan in the first place, even though such denials were repeated and well documented.

In fact several members of Pakistan’s Senate noted that Interior Minister Rehman Malik offered to resign if it was ever proven Blackwater was operating in Pakistan, and are now asking for his resignation.

Minister Malik has yet to comment on the Blackwater revelation, but with his loss of legal immunity to assorted corruption charges he is facing imminent ouster and possible jail time, which is likely to render the issue moot.