Back again like a bad penny, controversial Iraqi politician and architect of the 2003 US invasion Ahmed Chalabi has once again returned to the headlines amid a growing election scandal. 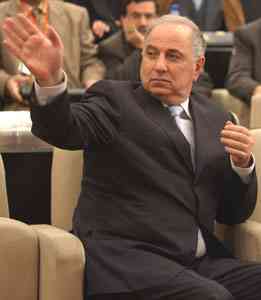 Gone are the days when Chalabi was funneling false information to the Pentagon to justify a war, and the days when he was America’s favorite for a key leadership position in the post-occupation government. But as the head of Iraq’s hastily assembled Justice and Accountability Committee (JAC), he retains surprising power.

The JAC grew out of the de-Ba’athification committee, and were the ones who submitted a list of 500+ candidates for parliament who should be banned for alleged Ba’athist ties. The list was submitted to the Independent High Electoral Commission (IHEC), who immediately rubber stamped it.

The move not only effectively destroyed the third largest political bloc in Iraq, but has sparked concerns of a broad-based Sunni boycott. It has also led to questions of the legality of the JAC by President Jalal Talabani.

The details of the ban list have not been made public, but the only major politicians known to be on it are Sunnis. So far not a single member of Chalabi’s INC Party or any of its allies has been named to the list, sparking concerns that Chalabi is using his influence with JAC to undermine key political opponents in March.

It has also sparked charges that Chalabi’s key non-US ally, the Iranian government, is exerting undue influence on the vote. Whatever the case the JAC seems to have greatly benefited sectarian Shi’ite blocs at the expense of the secular alliance of Ayad Allawi and Saleh al-Mutlaq, and done serious potential damage to the election’s credibility.