Responding yesterday to the growing prospect that the government of President Asif Ali Zardari might refuse to abide by court decisions stripping them of legal immunity, a court official raised the prospect of calling the army in to implement the rulings. 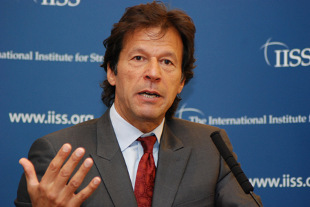 Today, key opposition figure Imran Khan, seen as a close ally of the Supreme Court’s leadership, expressed support for the decisions, and detailed exactly how the move might look.

According to Khan, the judiciary might order the army to take over control of day to day governing of Pakistan for a pre-determined period of time, setting the stage for early midterm elections.

A nation with a long history of coups d’etat, the increasingly weakened Zardari government has fueled speculation that, just a few years after ending the military rule of General Pervez Musharraf, a new coup could be forthcoming. Army Chief Gen. Parvez Kayani has insisted he is opposed to military meddling in the nation’s governance.

At the same time, Human Rights Watch issued a report today accusing Pakistan’s military of a concerted effort to undermine Zardari’s administration, and suggested they have repeatedly tried to oust him from his office.