A growing war of words is emerging tonight as the US military, ostensibly dispatched to Haiti to help with humanitarian efforts in the wake of a disastrous earthquake, is being accused to blocking aid from entering the nation as well as flights for non-American citizens from leaving. 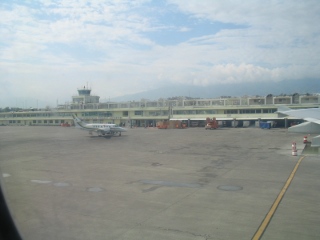 “This is about helping Haiti, not about occupying Haiti,” cautioned one French minister, who slammed US troops that seized Haiti’s only airport and have since been directing traffic as it suits them.

Doctors Without Borders, one of the world’s most high profile aid groups and the recipients of several major donations for Haitian relief efforts, complained that the US military actually blocked several flights carrying badly needed medical supplies, including inflatable emergency hospitals, ordering them to divert to the Dominican Republic instead.

US military spokesman for Haiti operations Captain John Kirby shrugged off the complaints, citing “security concerns.” Another official blamed “a crowded parking lot.” Still other commanders promised that the military would change its practices so that humanitarian aid was given a higher priority, sparking inevitable questions about why this wasn’t the case in the first place.

Despite efforts to get some clarification from Defense Secretary Robert Gates about the scope of the operation, he would speak only in vague terms. Troops in the country insisted they “aren’t here to fight,” but their actions on the ground suggest that even in a purely humanitarian operation the US is very comfortable with the role of occupier, and the perpetual war mentality is extending to control over the tiny airport, with disastrous consequences.