Afghanistan’s parliament again rejected most of President Hamid Karzai’s nominees for cabinet today, with only 7 of his 17 latest picks being approved. This is the second time this month that parliament has rejected Karzai’s picks, and leaves him with 10 positions of his cabinet yet to be filled. 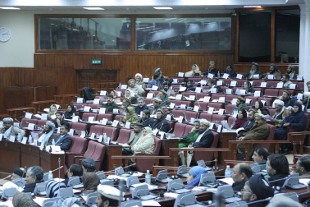 Karzai is desperately trying to assemble a cabinet before the London Conference at the end of the month, and will face an uphill battle soliciting international funds for ministry projects if he isn’t able to fill those ministry positions.

But parliament rejected his first list as filled with corrupt incumbents and warlords, and had been complaining that his new list was full of political unknowns whose only qualifications were a degree and a history of loyalty to Karzai politically.

It was widely expected, despite Karzai winning reelection in an election marred with millions of fraudulent votes, that parliament would not oppose his cabinet nominees. Public complaints about the lack of reformists was one thing, standing against both the president and the NATO powers which gave their imprimatur to the nominees was quite another.

Still, some in parliament are upbeat about their chances in this ongoing battle, saying it is simply a healthy process for the young democracy. It remains to be seen, however, what Karzai will do about his half-empty cabinet.