At least 96 people were killed today and over 100 wounded when a suicide car bomber struck a crowd of spectators at a volleyball match in the Shah Hassan Khan village in Bannu District, Northwest Frontier Province. 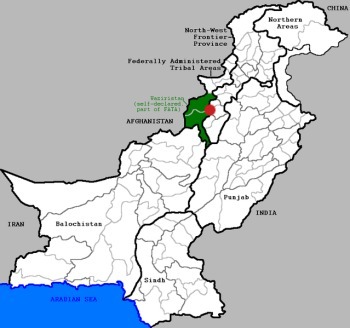 The carload of explosives did massive damage to the village, including 20 homes in the immediate vicinity. The village was less than 20 miles from South Waziristan Agency, the site of Pakistan’s largest ongoing military operation.

The village elders had recently organized a tribal militia aimed at expelling the Tehreek-e Taliban Pakistan (TTP) from the village, after Pakistan’s South Waziristan offensive led to growing numbers of the militants taking refuge in the town.

Though there is still no confirmation of who launched the attack, it seems likely that it was in response to the tribal militia’s formation. The elders were reportedly not injured in the attack, as they were making plans for the militia in a mosque at the time.

6 thoughts on “At Least 96 Killed in Pakistan Suicide Bombing”