Tensions are rising at the Eastern Maysan oil field, which straddles the border between Iran and Iraq, and Iraqi forces have massed at a “staging area” just outside the field, awaiting orders. 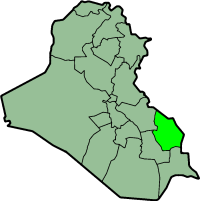 The situation started yesterday when Iraq’s Deputy Foreign Minister claimed 11 Iranian soldiers had “invaded” the nation and occupied one of the abandoned oil wells.

US officials say they approve of Iraq’s escalation of the as yet unclear situation, and Ambassador Chris Hill declared that it “speaks to the overall view here that they are not going to be pushed around by Iran.”

Iran said reports of its invasion were misleading, adding that the field’s ownership is “disputed and now it is neglected by both sides.” They added that the well in question lies “exactly on the border between Iraq and Iran.”