Earlier this week House Speaker Nancy Pelosi (D-CA) warned the Obama Administration that she had no intention of going out on a limb campaigning for the “emergency” war funding bill they need to pay for the latest Afghan escalation. 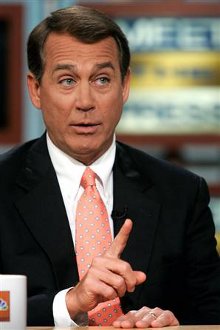 Adding to the difficulties, today House Minority Leader John Boehner (R-OH) warns that Republican support for the bill is predicated on it not including any provision for closing the detention center at Guantanamo Bay.

“I am not going to support a bill that – that facilities bringing Gitmo prisoners to the United States,” Boehner warned. With the war’s growing unpopularity, many House Democrats are expected to be under pressure to oppose the escalation, forcing the president to rely on Republican support for the war.

President Obama promised, immediately after taking office, that he would close the detention center at Guantanamo Bay within one year. One of his first post-election promises, it was also one of his first broken promises, as he has admitted he has no intention of closing it before the mid-January deadline is up.

One thought on “Rep. Boehner Warns Not to Tie Afghan Escalation to Gitmo Closure”