Though Obama Administration officials insist that they remain committed to sanctions as their next step against Iran’s civilian nuclear program, CENTCOM commander General David Petraeus seems to be playing up the military operation enjoyed by various countries. 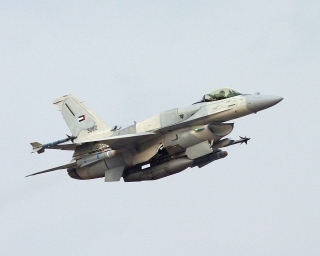 Speaking of the United Arab Emirates, whose Air Force has been heavily supplied by the United States (like so many other Gulf nations), the general declared “the Emirati Air Force itself could take out the entire Iranian Air Force.”

Why the UAE should want to launch such an attack was not clear at all, as relations between the two countries are relatively strong and the nation would stand to sustain fearful damage from attacking its much larger neighbor across the gulf.

Still, Petraeus urged the UAE and other Gulf nations to “join forces” against Iran, insisting that the “growing Iranian threat” warranted a harsh reaction. US rhetoric aside, Iran’s civilian uranium enrichment program appears to pose a threat to no one, least of all the tiny UAE.

18 thoughts on “Petraeus: UAE ‘Could Take Out the Entire Iranian Air Force’”