Speaking at Afghanistan’s Foreign Ministry today, US Ambassador Karl Eikenberry sought to assure top diplomats that the war in Afghanistan would continue for a long time after 2011. 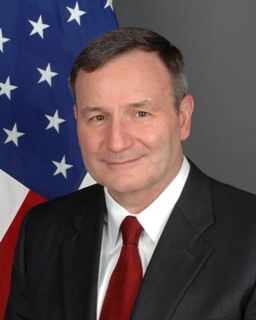 Though Ambassador and retired General Eikenberry was seen at the forefront of the opposition to the latest escalation and an advocate of an exit strategy, he insisted today that the military commitment to Afghanistan “won’t end or decline” and that the July 2011 date was “flexible.”

In a separate radio interview, Eikenberry insisted that the US had a “long-term partnership” with Afghanistan would continue for decades and that what was being sold to the American public as a “withdrawal” was really the seeds of a stronger, longer term partnership.

Though polls show the American public turning clearly against the continuation of the conflict, administration officials seem determined to convince their Afghan subordinates that the war is still open-ended, even as they tell Americans that it is winding down.

One thought on “Eikenberry: US to Stay in Afghanistan ‘Long After’ 2011”