Germany is just 10 short months away from finally paying off one of the most onerous post-war reparations debts in human history, its massive war debt from the Treaty of Versailles. 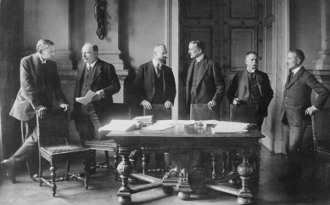 The German Empire entered World War One in 1914 on the side of Austro-Hungary. In June 1919 they were forced to sign the Treaty of Versailles, ceding West Prussia to Poland and Alsace-Lorraine to France. In addition, Germany was forced to pay for all damages suffered by every Allied state during the war, roughly 100 million kilograms of gold.

With hard currency flowing out of the country en masse to pay the reparations, post-war Germany’s Weimar Republic saw massive hyperinflation and a huge drop in standard of living. Resentment of the Treaty of Versailles and the economic strife the reparations brought led to growing nationalism and eventually World War Two.

But Germany’s reparation debt came back after World World Two, and was quickly frozen again when the nation was split into West and East Germany. Following the 1990 reunification, the debt was again renewed and, several generations and several regime changes later, Germany was expected to continue paying for the war.

The good news is the debt is finally almost paid off. Another 56 million Euros are owed, and it is expected that the last payment will be made on October 3, 2010.