Italian Major-General Stefano Castagnotto, the European Union’s commander for Bosnia, conceded today that by any serious metric, Bosnia is stable. There is no outside threat to the nation, and no potential for a new internal conflict any time soon. 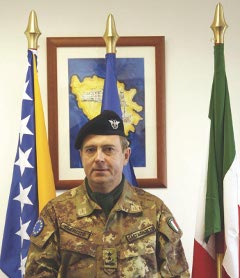 At the same time, the general doesn’t see the European Union forces leaving the nation any time soon, saying that keeping troops there was “a political decision” and that keeping thousands of European soldiers in Bosnia was about ensuring that the nation’s domestic politics were well suited to eventually integrating it into the EU.

In 1995 NATO entered the multi-year civil war in Bosnia with Operation Deliberate Force, a sustained month long bombing campaign which ended with the Dayton Agreement and a NATO ‘peacekeeping’ force in the nation.

NATO remained until late 2004, when it was formally replaced by the European Union Force Althea. EUFOR Althea’s troop levels remain at just over 2,000, and will likely remain so for the forseeable future.