As South Korea’s Truth and Reconciliation Commission continues its probe into the “Bodo Massacres,” the heretofore little examined slaughter of civilians by fleeing South Korean forces during the start of the Korean War, the commission announced that it has so far been able to confirm 4,934 Bodo members put to death in mid 1950. The commission recommends an official apology. 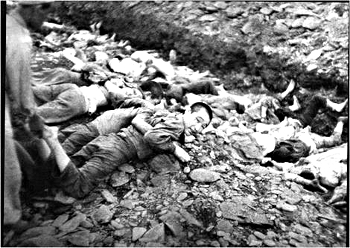 The Bodo League was a South Korean government re-education program aimed at integrating suspected Communist sympathizers into South Korean society. When the war broke out, South Korean officials massacred a large number of the group’s members and their families, ostensibly to prevent them aiding the communist North Koreans.

The nearly 5,000 confirmed people is only the tip of the iceberg, according to the commission, which says they amount to only about 10% of the overall deaths in the massacres.

The massacres were long a carefully guarded secret, with family members of those slain fearing persecution as communists themselves if they reported the killings. Discoveries of trenches full of bodies in South Korea recently have brought the topic back to life, and led to the commission’s probe.

Declassified records show US military officers were present at massacres and at least one formally sanctioned a mass political execution. Some have suggested the overall toll of the massacres could exceed 100,000 when all is said and done.