Speaking today in the US, Syrian Ambassador Imad Moustapha denied repeated US and Iraqi accusations that his government is assisting insurgents to launch attacks against Iraq. 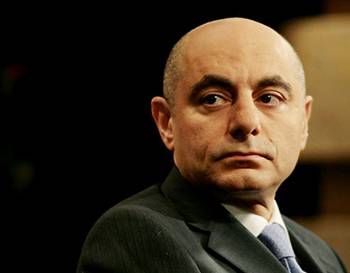 Imad Moustapha
“We want to help the Obama Administration have a very successul, smooth withdrawal from Iraq,” Moustapha insisted, labeling the claims to the contrary “propaganda.” He insisted Syria has been working with the US in private.

Gen. Ray Odierno has accused Syria of “facilitating” the insurgencies in Iraq and, incredibly enough, in Afghanistan. Iraqi Prime Minister Nouri al-Maliki has blamed the Syrian government for major attacks in the country, and the Iraqi government broadcast a confession from an “al-Qaeda” operative who accused the Syrian government of operating al-Qaeda camps.

The US allegations have been speeding up in recent weeks, however, and tensions appear to be nearing the level they were in late 2008, when the US launched an attack on a Syrian town then insisted Syria had been “relatively good” on border security.