Following an article in the Jutland Post quoting Danish soldiers in Afghanistan as calling for an exit strategy, the nation’s Foreign Minister Per Stig Møller condemned the quotes and insisted that there was no need to even discuss leaving Afghanistan. 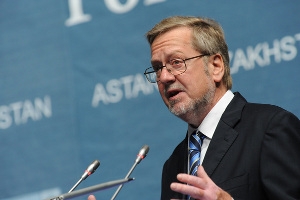 One of the soldiers insisted that it has gotten to the point where he has been completely unable to convince anyone that the mission is good. Denmark has about 750 troops in Afghanistan, mostly combat forces in Helmand Province.

But Møller slammed the soldier’s comment and said even having a debate about leaving Afghanistan “would strengthen the Taliban and al-Qaeda.” He has insisted that providing security is the top priority for the troops there.

Denmark has had 26 combat casualties since its troops joined the American-led occupation in 2002. Danish voters are split roughly down the middle about continuing the war, but very few believe that it can be won.