With reconciliation hopes with Hamas looking grim and peace prospects with Israel looking even worse, it is being reported that Fatah leader Mahmoud Abbas has told President Barack Obama that he intends to resign. 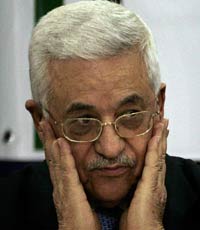 A top aide for the Palestinian Authority President denied that he had said any such thing, but exasperation is mounting at his inability to accomplish much of anything, and his politically disastrous handling of the Goldstone Report is likely only adding fuel to the fire.

Abbas is reportedly also frustrated that, after giving indications that he intended to take a hard line of Israeli settlements, President Obama has largely knuckled under and abandoned his demands.

Abbas’ influence within Fatah is also at its lowest point since taking power, as August’s election replaced many of the old Arafat cronies with younger leaders, many of them more independent from the existing party structure.

2 thoughts on “Is Abbas Poised to Resign?”