Ending weeks of speculation regarding the massive fraud in Afghanistan’s August presidential election, the Obama Administration has formally decided that incumbent President Hamid Karzai will get a second five year term, no matter what the investigations determine. 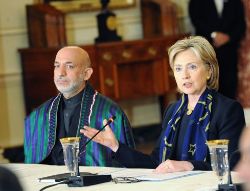 The preliminary vote count showed that President Karzai got 54.6% of the vote, and chief rival Abdullah Abdullah got only 28%. Election monitors however say that as many as a third of Karzai’s votes, amounting to over a million, were potentially fraudulent.

The Afghan constitution mandates a run-off vote in the event no one gets 50% of the vote, a distinct possibility if Karzai loses hundreds of thousands of fake votes. Officials however say such a vote will be virtually impossible because of the rapidly approaching winter. US and British officials have spoken out against a runoff vote, and a NATO meeting Friday appears to have settled the alliance on just eschewing the vote entirely and keeping Karzai in power, consequences be damned.

But the reality is that Karzai’s now seemingly formalized “victory,” coming in an election whose level of blatant fraud makes Iran’s June vote look like a model of responsibility is only going to increase the perception that the nation is under international occupation and that Karzai, rhetoric notwithstanding, is a figurehead.

That concern seems to have been lost on the Obama Administration, which has been crowing about the “success” of the vote for a solid month and seems eager to put the messiness of Karzai’s stolen election aside and move on with the long-promised “reconciliation” with the Taliban.