The Iraqi military has put the city of Tikrit under a full-scale curfew today after 16 detainees, including five al-Qaeda linked militants who were awaiting execution for “terrorism-related” charges escaped from prison. 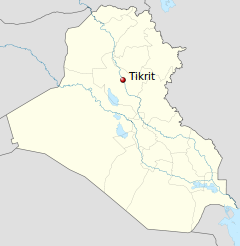 So far only one of the lesser escapees has been recaptured. The makeshift prison was a former Saddam Hussein residence and the 16 reportedly climbed out of the bathroom window to make their escape.

In addition to the city, security forces reportedly conducted searches along the Syrian border. Though Syria is about 150 miles from Tikrit through inhospitable regions, the Iraqi government has massed forces there in recent weeks accusing them of supporting militants.

Struggling to cope with the mass arrests of former members of the Ba’athist government and the enormous number of US-captured “suspects” that have been turned over to Iraq in recent months, the nation has had to contend with prison overcrowding with all the makeshift facilities they have created. It seems that security in these prisons is likely going to be an increasing issue.