The much-vaunted “tripartite summit” between President Barack Obama, President Mahmoud Abbas and Prime Minister Benjamin Netanyahu has come and gone, and as expected three men ‘sitting down in the same room‘ and trying to talk about the possibility of peace talks with having peace talks after all three assured that nothing good would come of the meeting yielded little of note. 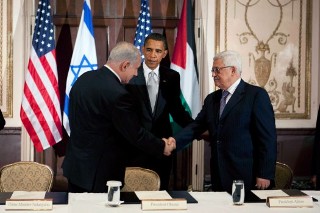 Prime Minister Benjamin Netanyahu claimed the three sides had a reached a general agreement to restart peace talks “without any preconditions,” an incredible claim which unsurprisingly was in stark contrast from comments from the other parties, which insisted that no deal was actually made.

President Abbas said Netanyahu’s statement “depends on a definition of the negotiating process.” He said the talks would need to be based on Israel withdrawing to its 1967 borders, something the Israeli government has repeatedly ruled out, and stopping the expansion of settlements, something else it has refused to consider.

In the end, it seems the three managed to agree, in principle, to the idea of having theoretical future talks about holding actual peace talks. Whether this is any actual accomplishment seems unclear, but Israel likely scored a diplomatic victory when US envoy George Mitchell declared that a settlement freeze was “not essential” to the peace process.

President Obama, however, is now reported to have issued another of his increasingly common ultimatums, demanding that both Israel and the Palestinian Authority respond to the prospect of resuming peace talks by mid-October. This deadline as all of President Obama’s previous ones came with no “or else” clause and will likely come and go much as his previous ones have.