In a public inquiry today was told that British soldiers’ abuse of Iraqi detainees were not an example of “just a few bad apples” but were rather part of a systemic problem, noting that soldiers routinely used banned techniques and abused detainees. 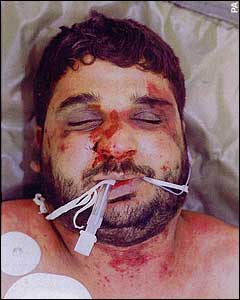 Baha Mousa, an Iraqi hotel receptionist who was killed while in British custody, sustained 93 separate injuries in the two days between his capture and his death. The most striking thing about his abuse, the inquiry was told, was that it wasn’t done behind the scenes but very publicly, in the general population of detainees held by the British.

One of the lawyers for the family of an abuse detainee noted that the British Army was “rotten” and that its conduct was a “stain on our nation’s reputation.”

Most of the soldiers put on trial for the abuse and killing of civilian detainees ultimately saw all charges dropped. Corporal Donald Payne, who was shown in a video of abuses, pled guilty to war crimes for his conduct in Mousa’s killing and was sentenced to 12 months in prison.

2 thoughts on “‘Routine’ Abuse of Iraqi Civilians by British Forces”