Speaking to the House Foreign Affairs Committee today, US Ambassador to Iraq Christopher Hill insists that the United States is sticking to its timetable, and is “on track” to have all combat forces removed by August 2010. 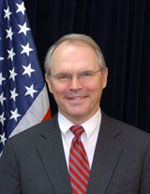 Hill’s comments were met with considerable skepticism, and it isn’t hard to imagine why. Iraq has been facing escalating violence for months now, and August was the deadliest month in over a year.

Troop levels since President Obama took office have scarcely changed, and officials say that they will remain roughly flat well into early 2010. Even Obama’s already nebulous “combat forces” promise, which was originally expected to leave “up to 50,000” troops in the nation past the date, has since been revised to leave “50,000 to 75,000” troops.

And while Ambassador Hill seems to be keeping with President Obama’s message that the security situation in Iraq is fine (despite the killings) and the pullout is going swimmingly (despite nobody actually leaving), General George Casey says that it is possible the rising violence might force a rethink on the pullout.

2 thoughts on “Envoy Insists US Sticking to Iraq Timetable”