Iranian President Mahmoud Ahmadinejad faces an uphill battle as he tries to get his proposed cabinet approved, and during a contentious meeting of Iran’s parliament today top conservative MPs condemned the nominees, noting that most have no experience in their chosen ministries. 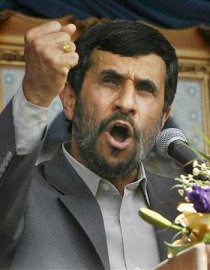 Ahmadinejad’s support in the nation has fallen precipitously in the past few months, as his hotly disputed victory in June’s election outraged reformists while his nomination of Esfiander Rahim Mashaei as First Vice President was roundly condemned by conservatives and hardliners.

With few high profile allies left, the Iranian president has attempted to construct a 21-man cabinet of loyal followers, despite having few left with any serious qualifications. His proposed Oil Minister Massoud Mirkazemi, for instance, served in the much less important Commerce Ministry, but has never worked in any capacity in the oil industry.

Critics say that the new cabinet will be the weakest in recent memory, and that many of the nominees would take over a year to get up to speed with what they’re supposed to do in these positions. Ahmadinejad insisted that his nominees would manage even without experience, and noted that Mirkazemi was a “brave combatant.”