When it was revealed earlier this week that the CIA hired the infamous Blackwater USA to take part in its long-secret assassination program, which itself only came to light last month after CIA Director Leon Panetta says he first found out about it, it certainly sent up a few red flags. 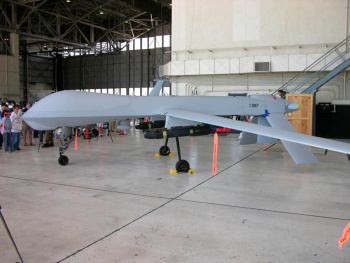 The company has since changed its name to Xe in the hopes of shedding its links with a brutal legacy that led to it being banned outright in Iraq. But Blackwater’s involvement with the CIA did not, officials say, begin and end with the dubious assassination program.

Blackwater has been arming the Predator drones the US has been using for its assorted air strikes into Pakistani territory. Not only that, former officials say the company has been providing security at the Shamsi, Pakistan air base from which many of those drone flights have been flying.

Blackwater’s own shoddy reputation and the unseemly nature of the programs it is involved in are sparking quite a bit of disquiet. Still, legal experts insist it isn’t clear that the CIA is breaking any laws in outsourcing these things to Blackwater. At least no laws it wasn’t already breaking in doing these things itself. As one former CIA lawyer put it: “the use of a contractor actually employing lethal force is clearly troublesome, but I’m not sure it’s necessarily illegal.”