10 days after he was quoted in an interview saying that the Afghan War “might take as long as 30 to 40 years,” British Army Chief of Staff General Sir David Richards sought to “clarify” his statement, which seems to be combination of attempting to spin the comment as meaning something else and denying that he said it in the first place. 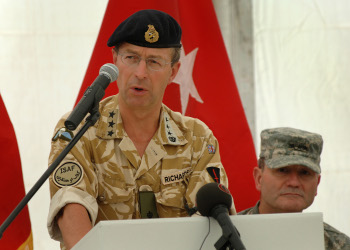 “It is not what I said or what I believe,” Sir David insisted in an official statement that followed a week of criticism for his frank assessment of the increasingly unpopular war. British Defense Secretary Bob Ainsworth insisted the war was “winnable” and claimed that troops could begin to pullout in as soon as a year, comments which seem timed with an eye toward Britain’s next elections rather than the reality on the ground.

The rising death toll among British troops in Afghanistan, which passed 200 this weekend, has the public looking at the war less and less favorably. But Britain’s next election is almost certain to be followed by another US request for additional troops to fight in the endless conflict, and the opposition seems eager to oblige.