In yet another case of apparent civilian casualties in a US raid, a military operation in the Spin Ghar district of Nangarhar killed at least eight people, including reportedly two members of Afghanistan’s security forces. The identities of the others slain remains disputed. 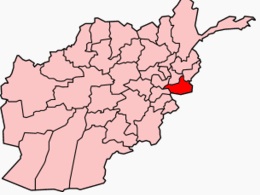 The raid reportedly came following reports of a planned militant attack to be carried out during next Thursday’s presidential elections. Provincial officials say thaty members of a border patrol officer’s family were among those killed, as well as the border patrol officer and a member of the military.

Members of the family were also detained in the raid, though it remains unclear at this point if they have been released, as has so often been the case in botched raids. Local tribals are reportedly still debating whether or not to bury the slain or to display them as a public protest.

Yet NATO’s official report of the incident claimed only three had been killed, and characterized them as “militants.” The remote district, located along the Pakistani border, is difficult to obtain detailed reports from, and the full details of the incident may not be known for several days.