One of the top US commanders in Iraq, MNF-I Chief of Staff Brigadier General Peter Bayer Jr. publicly chastised the top US adviser in Baghdad, Colonel Timothy Reese, and rejected Col. Reese’s call for a rapid withdrawal from the ongoing war. 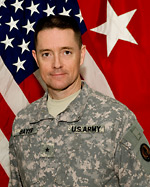 In his now famous memo, Col. Reese bluntly declared that the US military presence in the nation “isn’t yielding benefits commensurate with the effort and is now generating its own opposition.” The memo also went on to remind readers that US forces are supposed to be guests in Iraq and that “guests, like fish, begin to smell after three days.”

Brig. Gen. Bayer condemned Reese as “uninformed” and insisted the memo just amounted to “one officer’s view, written fairly early after June 30, who has a limited viewpoint.” He went on to insist that Iraq remained vulnerable and that the military would have to continue its commitment with the elections coming in January.

The “one officer’s view” in this case, however, is the view of the chief of the Baghdad Operations Command Advisory Team, and previously was director of the Army’s Combat Studies Institute. Though Bayer’s harsh criticism, and Gen. Odeirno’s comments before him suggest that the Obama Administration is going to ignore the memo and continue fighting the war, it seems at best they are doing him a great disservice to the case for withdrawal by labeling Col. Reese “uninformed” and at worst revealing that the war is so haphazardly managed that they can’t even keep their top adviser apprised of the situation on the ground.