64 years ago on August 6, 1945, the United States dropped a nuclear bomb on the Japanese city of Hiroshima, immediately killing 70,000 Japanese (the vast majority of them civilians) and killing tens of thousands of others in the years that followed, with the final toll estimated at 140,000. It was the first of only two uses of nuclear weapons in human history (the second was three days later in Nagasaki) and the deadliest. 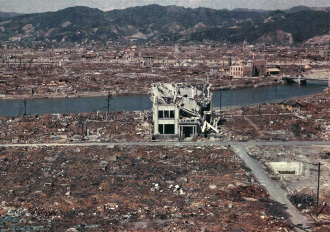 Today, a poll by Quinnipiac University found that 61% of Americans felt the attack was “the right thing” while only 22% believe it was wrong. Somewhat encouraging, however, was that the willingness to question the attack was significantly larger among younger people, with people between the ages of 18-34 split roughly down the middle about whether the killings were acceptable.

In the US, it is still common for school children to be taught that the nuclear attack saved millions of lives, and the poll shows that the belief that the attack was immoral is very much a minority opinion. It was not always the case, however.

Former President Dwight Eisenhower said he believed the attack was “completely unneccesary,” adding that “Japan was, at that very moment, seeking some way to surrender.” President Truman’s Military Chief of Staff Admiral William Leahy said “the use of this barbarous weapon at Hiroshima and Nagasaki was of no material assistance in our war against Japan,” Admiral Leahy also said “my own feeling was that in being the first to use it, we had adopted an ethical standard common to the barbarians of the Dark Ages. I was not taught to make war in that fashion, and wars cannot be won by destroying women and children.”

2 thoughts on “64 Years Later, US Support for Hiroshima Nuking Lingers”