Following comments this weekend by British Ambassador to the United States Sir Nigel Sheinwald, in which he cautioned that it was going to take “decades” more for the war effort to even get to the point where Afghanistan is about to “ward off the return of the Taliban and al-Qaeda,” the government now faces the herculean task of selling that war to the public. 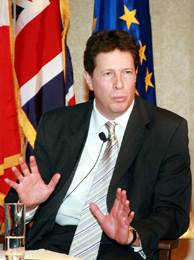 According to preliminary reports, Monday’s defense ministry policy statement will attempt to liken the insurgency to the Ku Klux Klan, and will try to sell the message that only an ongoing war in Asia will prevent terrorist attacks on the streets of Britain. Less clear is if they will try to reconcile this comparison with the historical KKK, which has become virtually irrelevant compared to its influence in the 1920s without an enormous multi-decade military occupation.

What the Labour Party government will attempt to sell the public on, however, is that nearly eight years into the war some sort of lesson has actually been learned that won’t be repeated in the many, many decades of occupation to come.

But with the opposition to the war rising, the war as a political issue has yet to emerge in Britain. Indeed, Opposition Leader David Cameron, widely expected to become the next prime minister, is likewise speaking favorably about escalating the war, declaring that the sooner Britain commits even more troops to the war the sooner it will finish.